Calificado n.º 1
Alila Solo
9,0
Excelente 9,0
Basado en 249 comentarios
Detalles
Opiniones
$74.417
Ver oferta
Aston Solo Hotel
Ver todos los detalles
Limpieza
8,5
Confort
8,6
Ubicación
8,4
Servicios
8,3
Personal
8,8
En general 8,5 Excelente
Basado en 310 comentarios
Todas las opiniones
Limpieza
8,5
Confort
8,6
Ubicación
8,4
Servicios
8,3
Personal
8,8
Excelente 8,0
Ventajas: The bed was very comfortable and have enough cushions (pillow etc) to make us very comfortable. We've got there after a long motorcycle road and we were in need of a comfortable bed.
Excelente 9,2
Ventajas: Clean rooms, good breakfast spread. Receptionist could speak English. Service level is professional.
Desventajas: Gym was small and most equipment did not work. Treadmill & elliptical machines have errors on screen and cycle machine handle is broken.
Excelente 9,0
Ventajas: Food dan location
Desventajas: -
Excelente 8,0
Ventajas: breakfast is nice, the price is okay and facilities very good.
Desventajas: wardrobe for dress to short
Excelente 8,0
Ventajas: The hotel is nicely located despite of the current construction going in the city. It was just the opposite of the Ngarsopuro Market and Pura Mangkunegaran. The room is clean and the staff are really helpful. They offer me free cloth pressing when they couldn't provide me with clothing iron.
Desventajas: I actually like the food they serve for breakfast, taste-wise. However, I think they should serve more international varieties like pasta?
Excelente 8,3
Ventajas: The room was clean and comfortable. Breakfast spread was very good, wish I could try everything
Desventajas: We could hear quite a bit of loud sounds of moving furniture or pounding... Not sure if there was some renovation going on 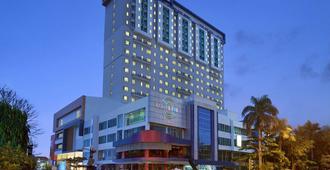 Calificado n.º 2
Aston Solo Hotel
8,5
Excelente 8,5
Basado en 310 comentarios
Detalles
Opiniones
$28.007
Ver oferta
Adhiwangsa Hotel & Convention Hall
Ver todos los detalles
Limpieza
8,1
Confort
8,4
Ubicación
8,3
Servicios
8,4
Personal
8,5
En general 8,4 Excelente
Basado en 67 comentarios
Todas las opiniones
Limpieza
8,1
Confort
8,4
Ubicación
8,3
Servicios
8,4
Personal
8,5
Bueno 7,0
Ventajas: Breakfast was exceptional!
Desventajas: The room did not meet our expectation
Excelente 8,0
Ventajas: I could check-in before 2 PM
Bueno 7,1
Ventajas: Menu of breakfast are good
Desventajas: Hot water in the room are not stable and looks not working so well
Bueno 7,0
Ventajas: Great offer of facilities, though some a bit old and not very good in shape...
Desventajas: Everything felt a little messy, e.g. it was hard to find some facilities as there were no signs or anything. I expected more cleanliness for the money.
Excelente 10,0
Ventajas: Really kind stuff and the breakfast was super, also the swimmingpool. All in all is it good for the price
Bueno 7,5
Ventajas: in the central,the room is ok
Desventajas: lift at that time not work.building is nice and good.

Calificado n.º 6
The Alana Hotel & Convention Center Solo By Aston
8,2
Excelente 8,2
Basado en 120 comentarios
Detalles
Opiniones
$33.608
Ver oferta
The Sunan Hotel Solo
Ver todos los detalles
Limpieza
8,1
Confort
8,3
Ubicación
8,3
Servicios
8,2
Personal
8,1
En general 8,2 Excelente
Basado en 90 comentarios
Todas las opiniones
Limpieza
8,1
Confort
8,3
Ubicación
8,3
Servicios
8,2
Personal
8,1
Excelente 10,0
Ventajas: Very comfortable, clean hotel, fast and friendly service. The breakfast menu is very varied and delicious and at 9.30 am still added more for rice and various dishes, so for example after swimming, just entering the restaurant after 9.30 am , there are still many dishes. The food menu is also suitable for children under 12 years. The swimming pool is clean and there are three depth variations. Starting from toddlers, children and adults. The location is near a large mall in Solo. And there is something special that is a drug store at the hotel.
Aceptable 5,4
Ventajas: Excellent
Desventajas: Bed is too soft
Bueno 7,5
Ventajas: Facility quite good
Desventajas: Just ok ... but not the best
Excelente 8,8
Ventajas: The room big and comfortable. The swimming pool is big and clean A lot of parking area. Very fast check in with friendly staff. Location is good.
Desventajas: I stayed 3 nights and booked for two rooms. The breakfast menu was not changed. The only two kind of main food were changed. Others were exactly same. Breakfast menu need to be improved.
Excelente 8,0
Desventajas: The water of the swimming pool was not that cleat
Bueno 7,0
Ventajas: Breakfast
Aceptable 5,4
Ventajas: big room
Desventajas: check in too long even we have been informed before, no greeting welcoming
Bueno 6,7
Ventajas: Location
Desventajas: Old property need to renewal, swiming towel color is same as guest room towel
Bueno 6,0
Ventajas: The prompt service when I asked for an extra bed as well as when I needed a light under the window ledge to be disconnected.
Desventajas: The band in the middle of the lobby making it impossible to hear the receptionist or for her to hear me.
Bueno 7,3
Ventajas: nice and quiet hotel
Desventajas: internet-based host
Bueno 6,3
Ventajas: Its comfort and amenities. In addition to its spacious size, deluxe room provides complimentary of two bottles mineral water, sachets of instant coffee, jug water, and sleepers.
Desventajas: Nothing
Aceptable 5,3
Ventajas: The hotel its self is good but for us the location is outside the city but in general is ok
Desventajas: None
Bueno 6,7
Ventajas: It has a 24-hour room service.
Desventajas: Nope

Calificado n.º 7
The Sunan Hotel Solo
8,2
Excelente 8,2
Basado en 90 comentarios
Detalles
Opiniones
$39.209
Ver oferta
Rumah Turi Green Boutique Hotel
Ver todos los detalles
Limpieza
7,9
Confort
8,0
Ubicación
8,7
Servicios
7,3
Personal
8,6
En general 8,0 Excelente
Basado en 105 comentarios
Todas las opiniones
Limpieza
7,9
Confort
8,0
Ubicación
8,7
Servicios
7,3
Personal
8,6
Mediocre 2,9
Ventajas: In quiet street
Desventajas: Grubby mildew in shower when we arrived we were greeted by staff,all sitting around a table, with “what do you want” central court yard with plants and water attracts lots of mosquitos and not mosquito netting on windows. Property is far from centre and railway station
Excelente 10,0
Ventajas: Central location, though hidden inside a "kampung", a village-like division inside an Indonesian city. The place is made exceptionally green. The best of all is the staff: they really went out of their way to make me enjoy my stay, and they have fulfilled each and every of my requests. Thumbs up!
Desventajas: For the price? Nothing.
Bueno 7,0
Ventajas: I loveeee the ambience, the location superb near Mall Paragon.
Desventajas: Maybe because this place built since 2007/2008 thats why the furniture is quite old and dusty.
Excelente 9,6
Ventajas: The plants and green environments was really nice. The highlight was the open communal area which I could use for doing some Yoga, dance practice and hanging out with friends.
Excelente 9,2
Ventajas: El entorno de la vegetación, lo acogedor que era el hotel, en una zona tranquila.
Desventajas: Debido a la vegetación y fuentes de agua que hacían un paisaje selvático, había muchos mosquitos en la zona de jardín y recepción por las noches.
Aceptable 5,7
Ventajas: The hotel is in a quiet location in a very clean part of Solo. The center is easily reached by taxi at a low fare (IDR 15'000 at the time of writing). The hotel staff is helpful in every way, gave me another room because I didn't like the one they had assigned me, and provided free transport to the airport. The rooms, as the whole compound, are in a tasteful contemporary design, rather spacious and quite comfortable.
Desventajas: Even though the hotel is only two years old (according to a staff member), it is already beginning to wear off at the edges. Some furniture as well as some bathroom tiles are already chipped. Cleanliness is ok, but I would have appreciated if the frame behind the bed had also been dusted. When I was there at the beginning of October there were very few guests, and the hotel restaurant was not open. I was able to order food, however, which the staff got me from a nearby café. The hotel does not have a pool, but at this price it is to be expected. The deluxe rooms on the ground floor are very dark, since the windows face the wall that surrounds the compound, with only the tiniest bit of garden between the windows and the wall. 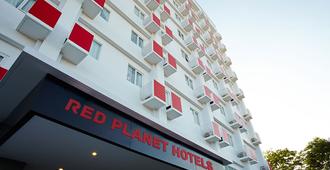 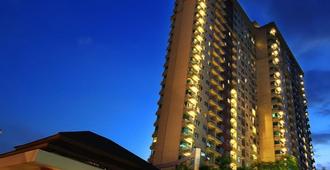 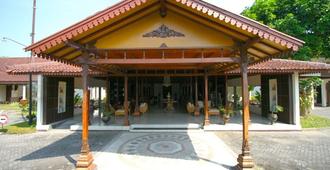 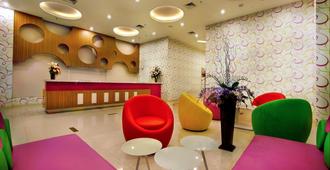 Calificado n.º 13
Favehotel Manahan - Solo
7,4
Bueno 7,4
Basado en 261 comentarios
Detalles
Opiniones
$12.803
Ver oferta
Syariah Hotel Solo
Ver todos los detalles
Limpieza
7,2
Confort
6,9
Ubicación
7,6
Servicios
7,0
Personal
7,9
En general 7,2 Bueno
Basado en 48 comentarios
Todas las opiniones
Limpieza
7,2
Confort
6,9
Ubicación
7,6
Servicios
7,0
Personal
7,9
Aceptable 5,8
Ventajas: Staff attitude and service.
Desventajas: Utensils are dirty. I actually tried to clean up the stains on cups in the room, and it works. Means it was not washed properly. Extra bed was just a foam mattress. Unlike normal hotel it's class with spring bed.
Bueno 7,5
Ventajas: It’s sharia
Desventajas: The swimming pool, it uses Lor-in Hotel pool.
Mediocre 3,0
Desventajas: I dont like it, because the hotel is poor, it has been no renovating or update
Mediocre 3,8
Ventajas: The conceige was helpful.
Desventajas: Check in supposed to be at 2 pm,and we arrived nearly 3 pm but the room was not ready for us. It supposed to be a 4 stars hotel yet the breakfast area was full of flies, can't even sit comfortable to have our breakfast. Room area The towel was not hygiene enough. Too smelly.
Excelente 8,0
Ventajas: The price was really cheapp
Excelente 9,2
Ventajas: The staff were very friendly and helpful. This includes reception, restaurant, outdoor (transportation people), laundry, and housekeeping staff. Thank you all for your kindness during my stay! The room was clean, and it was big enough. The breakfast had a lot of variety. There is a convenience store about 5 minutes walk from the hotel. There is music piped into the room at a very low volume. I'm not sure if it is all floors, and all days. Most of the time it is hardly noticeable. Actually, I liked the music very much, which was Islamic spiritual music or music of praise. Much of it was very beautiful. I appreciate that they turned it off completely at 9:00pm. The hotel is in an area with many mosques and Islamic institutions. I liked this and found it interesting. However, you have to be prepared for the early morning prayer call which took place before 5:00am, especially if you are a light sleeper.
Desventajas: I was surprised at the difference in price between the booking.com offer and other offers that I later discovered on the Internet. I normally expect booking.com to have very competitive prices. So I was a bit disappointed about this. At first my fridge didn't work, but I discovered later someone had forgotten to turn on the circuit breaker for the fridge. This was a minor issue, and after I flipped the switch it worked. 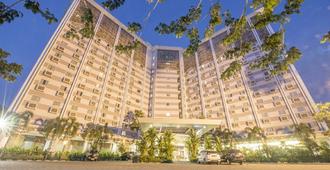